Artie and I have decided that we can no longer call the Norwegian Forest Cat by that appellation. He (at least we think he's a he) is adorable and oh so friendly. He sits on our front porch patiently waiting for us to bring dinner every evening.

Lately, he's been spending a good part of the day sleeping on our wicker love seat. He's surprisingly affectionate for an outside cat, talking to us, rubbing against our legs and enjoying it when we pet him. I love it when he runs up to me talking away or tries to follow me down the block.

He really doesn't look like a Norwegian Forest Cat. I see some Maine Coon in him and probably some Norwegian Forest Cat with Calico markings on his muzzle. Anyway, he has a beautifully surreal face. When I look at him I see the beast from Jean Cocteau's film Beauty and the Beast. I want to call him Beast or Marais after the actor Jean Marais who played the beast. We tossed around Cutie but abandoned it and we've been calling him Baby but it gets a bit confusing for Annie since I sometimes call her Baby too.

Lately I've been putting his plate of food in our front hall. He's been very reticent about entering the hall until finally the desire for food overrode caution. Yesterday I managed to shut the door without him knowing. It was interesting to see a peculiar look steal over his face when he realized he was in a quiet contained place.

He looked around; realizing the door was closed he leaned up and looked out the glass front door panel. He started to howl so I opened the door and he scooted out on the porch where he finished his meal. I want to bring him inside to protect him from a hard life outdoors. We're both determined to take care of him and give him the life he deserves. 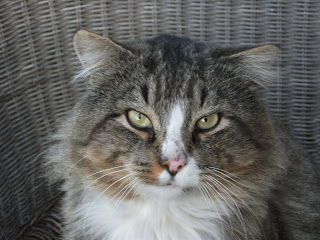