THE DOG MERCHANTS BY KIM KAVIN

While browsing at the library a book cover with an adorable puppy caught my eye. I grabbed the book, read the blurb inside the jacket and checked it out.

The book was The Dog Merchants by Kim Kavin. I had absolutely no idea how much I did not know about dog breeding, rescuing or the canine world situation. What an eye-opener!

This book talks extensively about how all types of dogs are marketed and about breeding for traits as well as cultural differences between countries such as the USA, Great Britain, Japan or China. Most importantly, the author points out that change can come to all areas of the pet industry if people educate themselves and use their power as consumers to bring it about. Specifically, she mentions rating breeders, rescuers and shelters online much as we do with all our other purchases pointing the reader to DogMerchants.com as the place to write such reviews.

I highly recommend this book. It is more than a good read, it is a textbook to educate you and help you make informed choices when adopting your next canine companion and a blueprint for bringing positive change to the lives of all types of dogs. 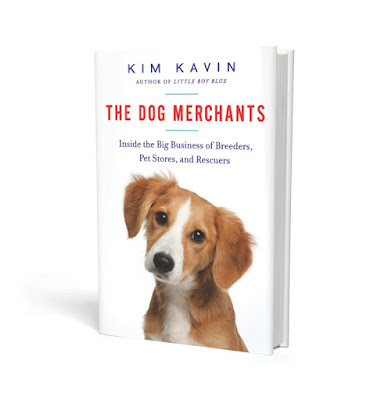 Posted by Barbara - Brooklyn Pet Mom at 1:26 PM No comments:

BACK TO MEDICAL ISSUES

In a house with one dog and three cats it's safe to say there's never a dull moment. Annie's medical issues were the main reason I put this blog aside over a year ago drastically reducing my posts to almost nothing.

Annie had a second tumor in the same family group as her first, went through a second operation then started radiation therapy. After five days of radiation therapy she developed back pain and lameness in her hind legs. She had some sort of spinal infection but all her tests came up negative.

The pain was excruciating; she lost the use of her back legs. Three neurologists and untold varieties of antibiotics and painkillers later the pain was relieved and the infection erased by a doctor wise enough to ignore the negative test findings and treat the symptoms.

Annie would have been cured but lame if Artie and I hadn't realized that her legs were atrophying. We contacted Dr. Young who has a therapist on staff. Regular at-home therapy sessions restored her back leg strength along with her ability to walk.

February 2015 was the second cancer surgery. One month later the radiation therapy started when the infection developed. Radiation was discontinued. Annie's recovery was very slow but steady; she spent many months on medicine, Early on, the Oncologist and Neurologist handling her radiation told us there was nothing else that could be done for her suggesting we end her life. Dr. Young believed whatever was going on was curable and deep in our guts so did I and Artie.

We worked with two more Neurologists, their assistants, many techs and everyone at Dr. Young's office to bring Annie back to health.  It took months of weaning her off the antibiotics but by New Year's Eve Annie was off the last of the antibiotics long enough that we could safely say the infection was eradicated.

Her therapy continued and she steadily regained strength in her hindquarters coming back to her old self by early summer of 2016 more than a year after her surgery.

The video footage was taken during the first few days of Annie's radiation therapy before the spinal infection manifested itself.
Posted by Barbara - Brooklyn Pet Mom at 2:34 PM No comments:

I've been trying to organize my kitchen cabinets (and my life but that's another story) so I can find ingredients for meals, etc. without having to dig through the entire closet.

While browsing Amazon I came across a set of labels from a company called Native Spring made with a chalkboard finish. You can use real chalk or purchase chalk markers. I purchased a set, got out some chalk I had lying around and picked a jar I felt was perfect to use for treats.


I love the finished look. The jar is on the kitchen counter where Artie or I can get treats in a second. Now I can't wait to label my cabinet storage jars!

This is a totally unsolicited post. Native Spring was not aware I was writing it nor did they ask me to. I've not been compensated in any way. I wrote the post because I was impressed with the product and the professionalism of the company's co-founder in answering my questions.

Posted by Barbara - Brooklyn Pet Mom at 12:30 PM No comments:

BECOMING PART OF THE FAMILY

My brother Artie adopted Mr. Handsome (formerly Porch Guy). It seems like ages ago when he was a stray showing up for a meal every day. Now he spends his days in Artie's apartment making it his own private man cave and his evenings at mine exploring and slowly becoming part of our family.

Recently, Artie prepped my kitchen cabinet for a paint job but Handsome had other ideas. He decided it would be a great place from which to survey his domain (meaning my kitchen)! Boy was I relieved he did this before we painted the inside. I hate to think what the cleanup would have been like if he waited until we were finished.

Once we coaxed him down it was easy enough to rewash the inside with a bit of vinegar and water to disinfect it.


Posted by Barbara - Brooklyn Pet Mom at 8:00 AM No comments:

I've spent quite a bit of time caring for my furry family and thinking about this blog. Now is the time to put my thoughts into action.

I need to take this blog in a slightly different direction by that I mean not focusing entirely on medical issues. Of course, I won't stop blogging about medical stuff but I will try to focus more on wellness. Fun items will be included and I will also go into my babies stories more.

Let's just see where my new resolve takes us...

Posted by Barbara - Brooklyn Pet Mom at 4:20 PM No comments:

JULIA AND WALTER, A LOVE STORY

This is a story that brings a tear to the eye and warms the heart. Julia, a 10 year old California girl who is deaf has a very special friend in Walter, a Chihuahua-Terrier mix who is also deaf.  What can I say that isn't said best by viewing this video?  Two thoughts come to mind: (1) there is someone for everyone and (2) visit a shelter when looking for a new best friend.


Posted by Barbara - Brooklyn Pet Mom at 6:00 PM No comments:

TIME OFF TO THINK...

My adorable Annie is back to normal but our Orphee is having some weight issues - he lost 2 lbs. in the last year and seems to be perpetually hungry.

Aside from having my time consumed with all their issues, I've been rethinking my approach to this blog.  At some point soon I will resume posting on a regular basis once I decide what changes I'm going to make.

Posted by Barbara - Brooklyn Pet Mom at 12:08 PM No comments:

JARETH THE GOBLIN KING AND SNAPE

It's been one surreal and sad week that started with a 6 AM Monday morning newscast on our classical radio station announcing David Bowie's death from cancer. The classical station announcing Bowie's passing was something I never imagined would happen as I did not imagine the loss of Alan Rickman a few days later.

So on a drizzly Saturday morning I found myself at the computer to write this post after the boys (Orphée and Handsome) had breakfast and while the girls (Annie and Belle) were still sleeping. 8 Paws and 2 Tails is a pet-related blog but on that dreary morning I felt the need to depart from my standard format to write about two men I admire who in the words of Shakespeare's Hamlet, shuffled off this mortal coil.

As a New Yorker with relatives in the music industry, a career in publishing and a life-long love of the theater, I was shocked and saddened by the deaths of David Bowie and Alan Rickman. I've been a 'fan' of both for as long as I can remember.

What can I say about David Bowie that hasn't been already said? I worked in Soho for as many years as Bowie lived there, my place of business and his residence separated by 3 short blocks. We both shopped in Dean and DeLuca's but to my misfortune in all that time our paths never crossed. I was fortunate to see him when he brought his Sound and Vision tour to Giants Stadium and before that on Broadway in The Elephant Man.

I love his music, enjoy his films and I sense he was a down-to-earth guy even though his creations were out-of-this-world. I can't imagine life without Bowie in it.

Alan Rickman has always had a special place in my heart for several reasons - his delicious portrayal of villains most notably Hans Gruber from Die Hard, his wonderful take on a classically trained actor caught in the fan frenzy of a wildly successful science fiction TV series in Galaxy Quest but mostly for his multi-layered portrayal of Professor Snape in the Harry Potter movies.

As Snape, Alan Rickman was an integral part of the Harry Potter phenomenon which I was proud to be associated with as well. For over a decade I worked in children's publishing at J.K. Rowling's American publisher experiencing the excitement associated with the publication of each book as well as the release of every film. Most in-house readers were not fans of Snape but I always felt there was more to the sinister, black-haired professor in severe black robes than surface appearances suggested as the latter books of the series proved.

I especially reveled in Mr. Rickman's well-crafted portrayal often wondering how he managed to keep a straight face while dishing out Snape's patented brand of teacher-terror. Sadly I never had the opportunity to see him 'tread the boards' in any of his state-side theater appearances. In interviews he was happy, fun and thoroughly upbeat, light-years apart from his well-known screen roles. I will miss your genius.

While I prepared for Annie's Sunday morning walk almost a week from that Monday-morning news announcement, I realized the classical station was playing Bowie's narration of Prokofiev's symphony for children, Peter and the Wolf. Later while checking emails I found one from Facebook announcing King's Cross Station was trending. Following the link I read that a makeshift memorial was put up at the site of the imaginary platform 9 3/4 where the express leaves for Hogwarts School of Witchcraft and Wizardry.

To both artists who touched us with their unique talents:
Good night sweet prince and flights of angels sing thee to thy rest! (Hamlet Act 5 Scene 2)

Posted by Barbara - Brooklyn Pet Mom at 8:19 PM No comments: