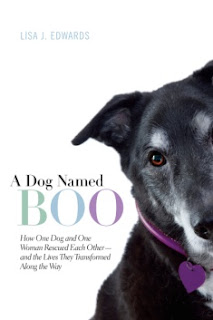 To label myself a procrastinator would be gross understatement.  True to form, I procrastinated on giving away two copies of A Dog Named Boo by Lisa Edwards supplied by Harlequin when they asked me to participate in the Virtual Book Tour way back when.

Actually, Harlequin sent three copies of the book - one for me to read and keep plus two others to give away. Somewhere along the way, I realized it would be nice to promote a blog give-away but as usual I procrastinated so here we are ONE YEAR LATER and I'm finally getting around to my first stab at a contest.

Let's start with a disclaimer: My review of the book was (and is) my own thoughts on this book, not influenced by the fact that Harlequin approached me to participate in the tour or by the copies of the book I received.

So here we go - I have a small handful of loyal followers so my first book will go to my very first follower, Mar-gay as a "thank you" for the loyal support over the past almost two years.  The second book goes to the reader who sends me the most compelling comment on why they would like to read this book.

I will announce the winner November 6th.  The contest is open to all who wish to comment. Good luck! Now it's time to celebrate - Happy Halloween!