Buddy is gone about four weeks now and there is a sadness I cannot shake, it is with me constantly.  I find my thoughts wandering back to my little man at odd moments during the course of the day.

It didn't occur to me at the time but the effort Artie and I put forth caring for buddy was actually hospice and palliative care.  Dr. Elisabeth Kübler-Ross would most likely be gratified to know the hospice movement she started so many years ago has extended to the pet world as well.

Elisabeth Kübler-Ross, M.D. was a Swiss-born psychiatrist who pioneered near-death studies.  She was the author of the book On Death and Dying in which she outlined the Five Stages of Grief: denial, anger, bargaining, depression and acceptance.  Dr. Kübler-Ross presented the five stages as the process those coping with terminal illness passed through before their death.  Not everyone experiences all five stages nor does everyone go through them in a set order.  In the decades since the initial publication of her book, the five stages model has been applied to survivors of a loved one's death - be that loved one human or pet.

Recently, I've been thinking over the almost three years' from Buddy's diagnosis to his death and I realize I have passed through most of the five stages.  This is how I perceive my journey through this process:

Denial - This stage happened immediately and lasted until a week before Buddy died overlapping with anger and what I call my response to bargaining.  Neither of us could make ourselves believe Buddy was so ill.  Never mind the fact we were administering fluids, shots, pills, capsules and a special diet.  All we kept saying to each other was "but he doesn't look or act sick".  Definitely denial.  I would say, for me, at the start of 2012 I began to force myself to face the fact of losing him at any time but it was hard not to revert to my denial.

Anger - I experienced plenty of this stage, however, it was directed at circumstances.  If something unrelated to Buddy's illness when wrong, my response was an overwhelming feeling of anger.  Suppressing the anger or getting angry with myself was one way of dealing with it; yelling at no one and complaining incessantly was another.  This stage passed once I convinced myself anger per se was not conducive to an easy passage for Buddy; both he and Annie would be affected by the negativity.

Bargaining - I don't do bargaining.  For me, this phase was a digging in of my heels, a rolling up of my sleeves and I was ready to do battle.  Nothing was taking Buddy from me if I could help it not even Death. I wasn't asking for one more month or day or hour.  Instead, I was going to cheat Death by actively working to keep him going.  This meant monitoring him, being attuned to the littlest change in his personality or habits and reacting accordingly.  I tracked all his needs on a daily chart.  I set goals - now I worked to  get him to my birthday, Thanksgiving, Christmas, New Year's Day, Artie's birthday and on it went. This was my anger channeled positively.

Depression - There came a point when I started to perceive subtle changes in Buddy's condition, a losing-of-ground so to speak and then came the depression with the knowledge that no matter how much I did battle, I was going to lose the war.

Acceptance - A tenuous acceptance laced with depression came with each medical issue Buddy rebounded from but not to where he had been before.  He was slowly losing ground and I was forced to accept the fact of losing him.

I'm still a bit down and sad that Buddy's gone and I acknowledge it will take time before those feelings leave me.  Now all I hope for is to get to a place where I will remember him and all the good time we spent together.  Knowing I did all I could for him is a big help and I look forward to a time when I'm not thinking of what his illness did to him. 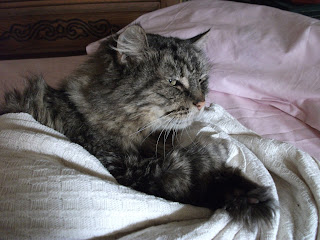