Monday we were home from Hope Vet about an hour before Annie realized Buddy didn't come back with us.  She had a panicked look on her face as she searched around for him. Once it sank in that Buddy was gone, she became depressed.
We were all depressed Tuesday and I was hoping the Davy Jones Memorial Concert at B.B. Kings that evening would at least help us forget our loss for a time and honor Davy.  I was concerned about Annie because she would be all alone for the first time that evening. We had the tickets before Buddy took a turn for the worse.  The best I could do was make a fuss over her all day long.  When it was time to leave, I left a light on and set my radio to the classical station so she would have soft music and calm voices.

We joined a group of our friends and we had a great time having a meal together, catching up and reminiscing.  MC'd by Bruce Morrow, the evening was really nice with Davy's band, friends and two of his daughters, Talia and Annabel, there to honor him. There were clips from concerts, Broadway performances, guest appearances on television variety shows and sitcoms and excerpts from The Monkees TV show.  Monkees' band-mates and life-long friends Mickey Dolenz and Peter Tork came to reminisce and perform as did Deana Martin, another life-long friend who guest-starred on their show.
Imagine my surprise when it was announced that a fund was to be established to assist Davy's horses.  Anyone who knows anything about Davy Jones knows he intended to be a jockey before he landed a part in Oliver and ultimately became a Monkee.  What most people don't know is Davy was involved in saving horses destined to be put down - all types of horses not just race horses.
At the time of his death, Davy had 16 horses and horses generally live to around 30 years of age which translates into a lot of commitment in terms of time and upkeep.  My brother and I talked with Annabel about  putting this information on the blog.  She told us all the necessary information was on the cards that were handed out.
If you are a fan of Davy Jones, The Monkees, horses or animals in general, check out The Davy Jones Equine Memorial Fund and watch for the launch of www.ManchesterCowboy.com.  Don't let Davy's dream die with him.  Here's a copy of the information cards Annabel mentioned: 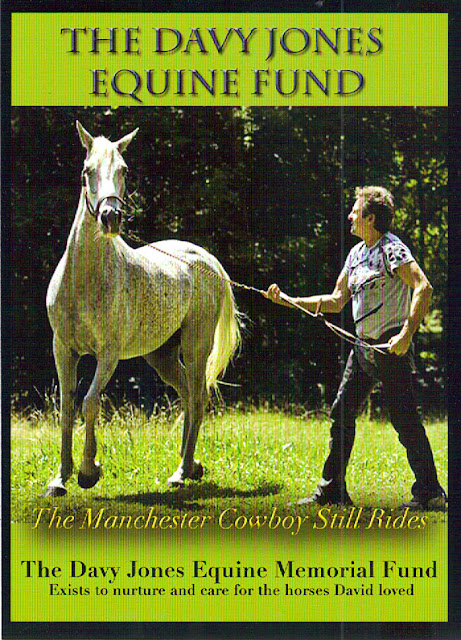 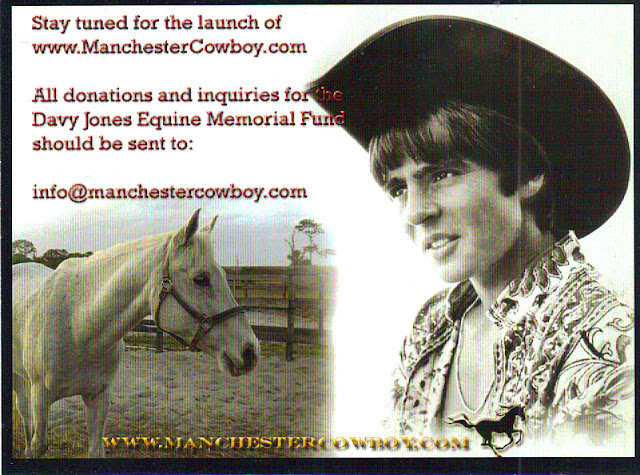